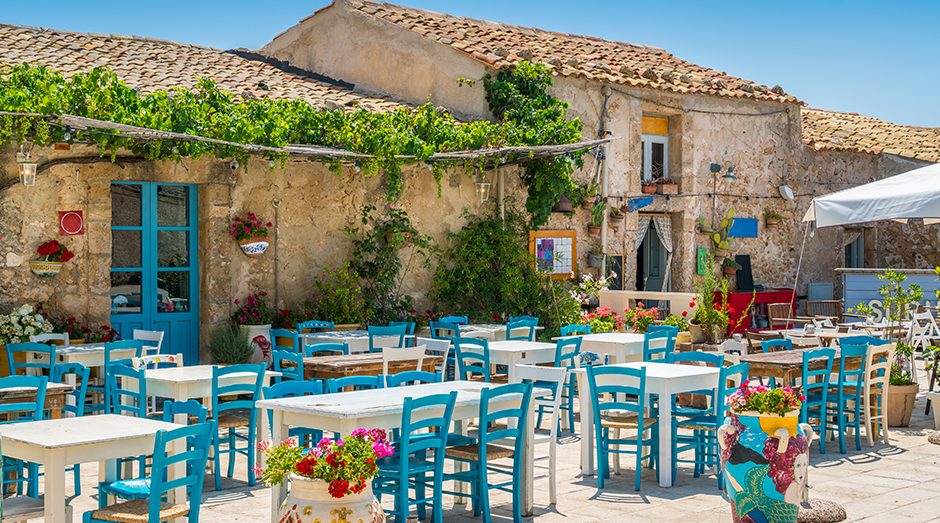 As the crossroads of the Mediterranean Sea, Sicily continues to seduce travellers with its impressive variety of landscapes and cultural treasures. When speaking of this region, one shall not forget that it is the largest island of Italy and of the Mediterranean, as well as the 45th biggest in the world. Thanks to its climate and conformation – 60% hillside, 25% mountainous, and the remaining 15% flatlands – Sicily brings to the table a wine and food heritage of an incredibly high level. Products that form the basis of a unique cuisine, resulting from the influences of the Greek, Arab, and Norman cultures that have dominated the island over the centuries.

With its estimated 107 thousand hectares (over 264 thousand acres), the area of Sicily dedicated to vine growing is one of the most prominent in Italy. The impressive body of Sicilian wines – due to both the vine variety and climate – has made it so that the top names have strived even on international markets. The most common red grape varieties include Nero d’Avola, Frappato, Nerello Mascalese, and Nocera. White grape varieties include, instead, Grillo, Catarratto, Grecanico, Malvasia di Lipari, Zibibbo, and Inzolia. Moreover, an aromatic wine named after the city it was born in and where it continues to be produced is made by using some of the said native grapes: the Marsala.

Every area of Sicily boasts traditional products, tracing wine and food itineraries across the island, in a varied and evocative agricultural landscape. The three main mountain ranges of Sicily are the Peloritani, the Nebrodi, and the Madonie, but they are all looked upon by the cone of Mt. Etna (3,263 metres a.s.l./10,705 feet a.s.l.), Europe’s tallest volcano. Its ashes are the secret to the high fertility of the Catania plain, the vastest and most cultivated area of the island. It is in this area that the PGI Arancia Rossa di Sicilia (red orange of Sicily) –one of the region’s symbols – is produced, along with the PDO Pistacchio Verde di Bronte (green pistachio of Bronte).  Other local products that have obtained an EU certification are the PDO Fico d’India dell’Etna (prickly pear of the Etna), the PGI Cappero di Pantelleria (caper of the Pantelleria area), the PGI Pomodoro di Pachino (tomato of Pachino), and the PDO Oliva Nocellara del Belice (nocellara olive of the Belice River valley). The latter allows the extraction of a particularly sophisticated product:the PDO Valli Trapanesi extra virgin olive oil. Another Sicilian oil boasting a Protected Designation of Origin is the PDO Monti Iblei, which is named after the South-East Sicily mountain range. But the region’s high-class oil production does not stop here: there are also the PDO Monte Etna, made among the olive groves at the foot of the volcano, the PDO Valle del Belice, produced in the province of Trapani, the PDO Val di Mazara, and the PDO Valdemone.
We shall end this tour of most famous Sicilian specialties with two cheeses. The first – made strictly using cow milk – is the PDO Ragusano, produced in about 15 towns in the provinces of Ragusa and Syracuse. It is instead sheep that make possible another masterpiece among typical Sicilian products: Pecorino Siciliano. It is a hard cheese made using fresh sheep milk and aged for at least 4 months.

ROWING DOWN THE ITALIAN RIVER OF ROSÉ