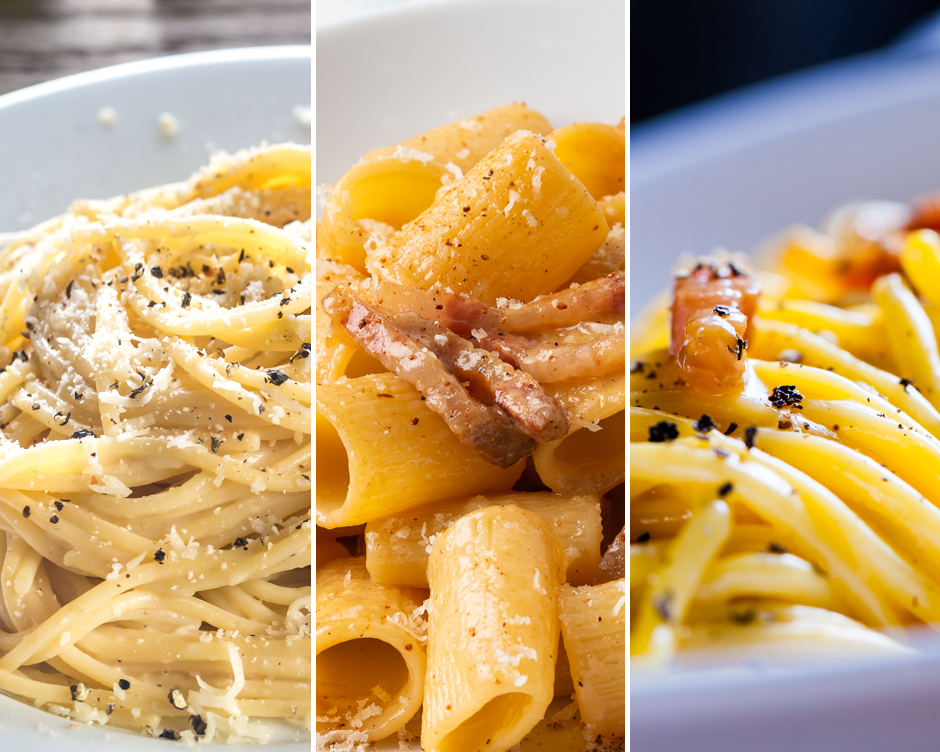 Famous all over the world for its stunning monuments, art galleries and that lovely feeling of dolce vita, Rome is also well-known to food lovers for three pasta courses that are featured on the menu of any trattoria romana (traditional restaurant) worth that name: Carbonara, Gricia and Cacio e Pepe. Despite their different names, these dishes share the same secret for success: just a few quality fresh ingredients, perfectly combined to create something absolutely delicious.

Carbonara is probably the most famous of all Roman pasta dishes. It is widely believed that pasta alla carbonara was born during WWII with the arrival of the American troops that mixed their canned bacon with local, easy-to-find ingredients such as pasta and eggs; not many people know, though, that the ancestor of Carbonara could be that cacio e ova (cheese and eggs) which used to be prepared in the Abruzzo region to feed entire families with a few, nutritious ingredients. Egg yolks, Pecorino Romano cheese, guanciale (cured pig jowl) and freshly ground black pepper: this is what it takes to prepare the real Carbonara. Cream, garlic, onion, herbs, butter and olive oil do not feature in the traditional recipe. As for the pasta, Carbonara lovers are equally divided between the ones who would have this creamy sauce with spaghetti and those who prefer it with short types like mezze maniche (pasta tubes).

The same ingredients, except the eggs, are used to prepare another much loved Roman dish: pasta alla Gricia. According to legend, Gricia was originally invented by the shepherds coming to town from the nearby mountains: for this reason, it is said that the very first recipe used ricotta salata cheese and not Pecorino Romano which the shepherds preferred to sell as most profitable. The origin of its name is still very much debated but the vast majority of people now tend to believe that it comes from Grisciano, a town in the province of Rieti: this would also explain why some restaurants spell its name “Griscia”. Considered by many as the forerunner of Amatriciana, the famous dish that attracts pasta enthusiasts to the town of Amatrice, Gricia sauce gives its best when paired with rigatoni (tube shaped pasta with ridges on the outside).

An institution in Roman cuisine and a culinary tribute to Pecorino Romano, Cacio e Pepe (cheese and pepper) seems to be the simplest of all four recipes. After all, it takes only Pecorino and black pepper. The truth is that preparing the perfect Cacio e Pepe involves a significant degree of concentration and the insider knowledge of a couple of tricks in order to give the right consistency to the sauce: the secret is preparing it in a glass bowl, mixing finely grated Pecorino cheese with some starchy water taken from the pot where the pasta is being cooked. Al dente, of course.