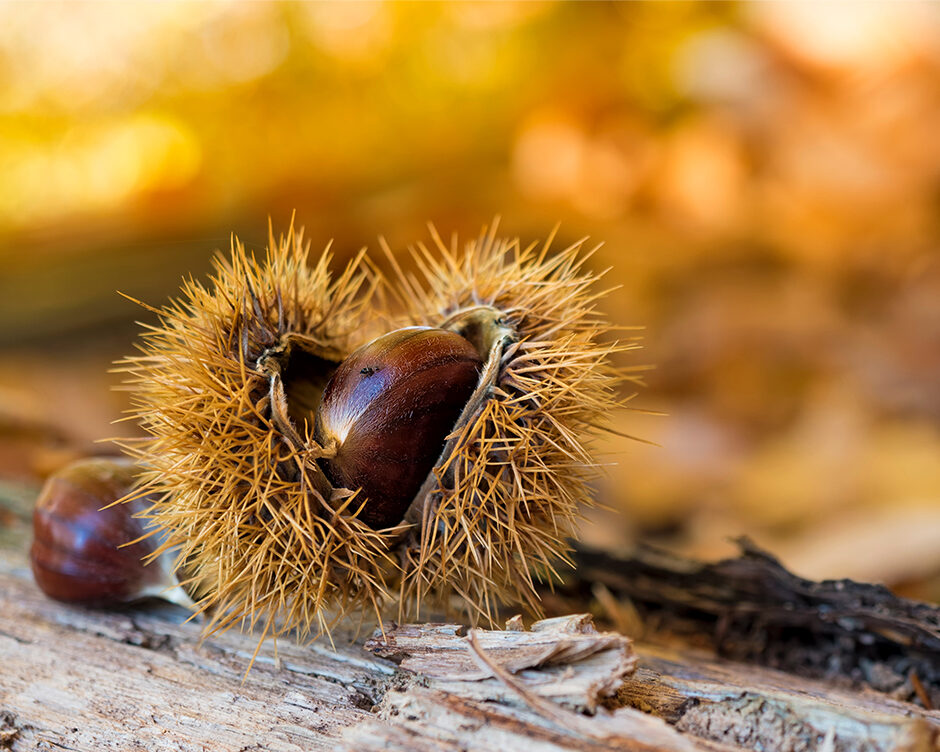 In Italy there is nothing more autumnal than the smell of roasted chestnuts that fills the air. In the past, before the economic boom of the 60s reached everybody, people would buy roasted chestnuts from street vendors and stuff them in their pockets to keep their hands warm and, of course, to have something nice to snack on. Nowadays street vendors are still there but roasted chestnuts are served wrapped in fancy paper cones and have become a rather fashionable street food.

Legend has it that Italians’ love for chestnuts dates back to Ancient Roman times, when chestnuts were used as a form of currency or trade when there were less crops due to poor weather. Since then, chestnuts have been an important food source and valuable commodity, especially in those parts of the country that were unsuitable for cultivating grains. They used to be ground to make flour for baking an alternative type of bread and making polenta, besides being roasted or boiled.

In contemporary Italian cuisine, castagne (chestnuts) are still processed and cooked according to tradition but they tend to be used also in creative recipes. With a soft, meaty texture and a sweet, slightly nutty flavor, chestnuts are one of the main ingredients of wintery soups and can easily replace potatoes in stews. They are candied or puréed when used in the preparation of cakes like, for instance, the famous Monte Bianco while chestnut flour – mixed with extra virgin olive oil, rosemary and pine nuts – is used to make Castagnaccio, one of the most popular Tuscan desserts. It is not unusual to find them in restaurant menus, served as a food delicacy when roasted and paired with a nice glass of Italian sweet wine.

Available from the end of September throughout the first winter months, chestnuts are rich in vitamins, minerals and antioxidants (even after cooking) while being low in fat. They also have a high starch content – hence the nickname ‘the cereal that grows on trees’ – that makes them an important source of carbohydrates. Peeled chestnuts can be frozen at -18/-20 °C for 6-12 months, without altering their nutritional values and distinctive taste.

THE NEW NORMAL IN FOOD AND IN CONSUMERS’ BEHAVIOR

The Covid-19 pandemic forced us all to change our lifestyle, including our purchasing habits and food consumption. The shift…

This complicated year is coming to an end and it is time to make balances and forecasts, but also…

As winter is rapidly approaching, the harvest season has just drawn to a close. The first news about the…