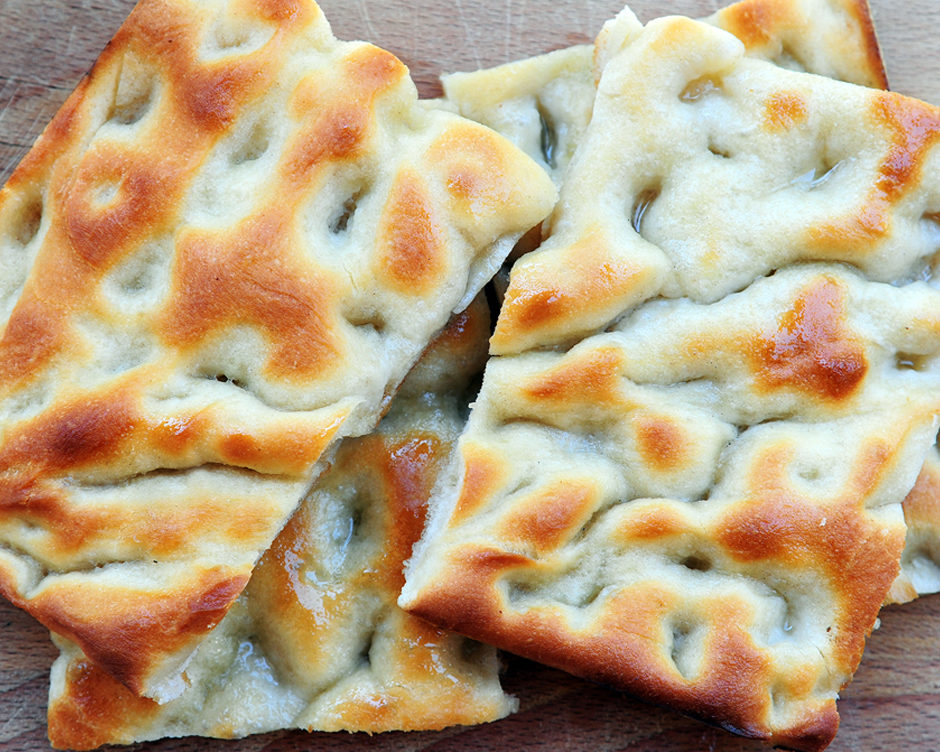 It is almost impossible to discuss Italian food without mentioning the three Ps that make it so popular all over the world: pasta, pizza and pane (bread). To be fair, there is a fourth element that should be added to this list as it has become more and more popular in recent years: focaccia, a delicious flatbread that looks like pizza but resembles bread in its preparation.

Despite being so up and coming worldwide both as a healthy street food and a posh substitute for bread in top-rated restaurants, the Latin origin of its name (panis focacius literally means bread baked in coals) tells us that focaccia was already well-known among the ancient Romans who used to place it on altars during their religious ceremonies as an offer to their gods. In its contemporary version, focaccia has been around since the 16th century. Legend has it that bakers in Genoa used to make focaccia early in the morning to test the temperature of the wood-fired oven before baking the loaves of bread; the result provided them with such a tasty snack that it soon became saleable to the public. Focaccia rapidly gained such a remarkable fame among the citizens of Genoa that they eventually adopted it as their favourite morning food: even nowadays the typical breakfast in town involves focaccia, which many locals love to dunk in a hot cappuccino.

The original focaccia – about 2 centimetres thick, crispy and oily on the outside and tender inside – is the one produced in Genoa and it is such an important staple in the Italian cuisine that its recipe is protected by Slow Food, the global organization founded in 1989 to prevent the disappearance of local food cultures and traditions. Nowadays each region in Italy has its own variation of focaccia and it is not unusual to find it under different names: pizza bianca is the thin, salty one that can be found in Lazio, especially in and around Rome, while schiacciata or schiaccia indicates the taller, softer version that can be enjoyed in Tuscany; in Apulia there is the Focaccia Barese stuffed with tomatoes while the most popular flatbread in Sicily is the Schiacciata Catanese, with cheese and anchovies. Despite the differences that characterize each one of them, the ingredients always remain the same: water, yeast, extra virgin olive oil, salt and good flour.

PLEASE MEET OUR TEAM: OUR LOGISTICS AND DOCUMENT DEPARTMENT SPECIALIST

According to Sun Tzu, a famous Chinese philosopher, the line between disorder and order lies in logistics. We very…

Why does the best basil in the world grow in Prà, in the western part of Genoa? Soil…

Probably created to counterbalance the effects of the high summer temperatures, Italian frozen desserts are rather enjoyable in any…