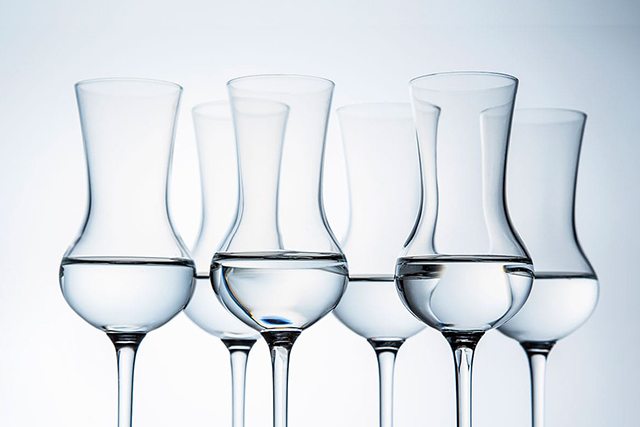 For decades, grappa has been little more than a form of pocket heating for farmers in Northern Italy. The ‘cool’ Italians and most foreigners disdained it”, wrote R.W. Apple Jr. on the New York Times in 1997. Things have changed a lot since then. Today, the grappa market is quite solid indeed. In 2017 the top-10 Italian companies achieved a total turnover of 211 million euros, with an average growth by 6% compared to 2016.

But let’s take it from the top. What exactly is grappa? Grappa is the par excellence national spirit, 100% Italian in terms of historic tradition, culture, and production techniques. It is obtained by processing a solid raw ingredient: pomace. Pomace is what is left over from wine pressing: the grape skins are placed inside copper stills (alembics), in which the water vapour extracts the alcoholic component contained in them. The aim of the distillation process is not only to concentrate the alcohol in the pomace, but also to extract its aromas and its distinguishing substances. In fact, a good grappa is able to capture the essence of a grape variety, to the point that the original terroir may be identified. Although hints of the distillation process have even been found in 1st century A.D. manuscripts, it is likely that grappa making from distillation of the pomace began in the 17th century.

Today, thanks to European Council regulations, the grappa denomination is exclusive to spirits made from Italian pomace, and may also be assigned the indication of geographic origin. Leading regions in grappa making are all in Northern Italy: Piedmont, Aosta Valley, Lombardy, Veneto, Trentino-Alto Adige, and Friuli- Venezia Giulia.

The sector is living a positive moment. In 2018, top players consolidated their international growth – even in a rather complicated year – and have gained strength by means of three levers of success: increase in export, launch of increasingly aged products, and entrance in the mixology (cocktail mixing) world.

To lead the ranking, there is Umberto Bonollo, the company owning the Bonollo Of brand, boasting a double-digit growth (+12%) which brought its turnover to nearly 42 million euros. In second place there is Distillerie Franciacorta, purchased in January by the Stock group, which through such operation – paired with its existing ownership of the brand Julia (from Brescia) – aims to become the national leader. In third place, we find Distillerie Bonollo (Modena), and finally there are Marzadro (from Trentino) in 4th place, and Bonaventura Maschio (Treviso) in 5th. Since 2016, all the top-10 grappa makers have increased their turnover.

Food consumer guide: how to read a food label with an infographic

SWEET HISTORY OF ITALY, THE BIRTHPLACE OF THE BISCUIT