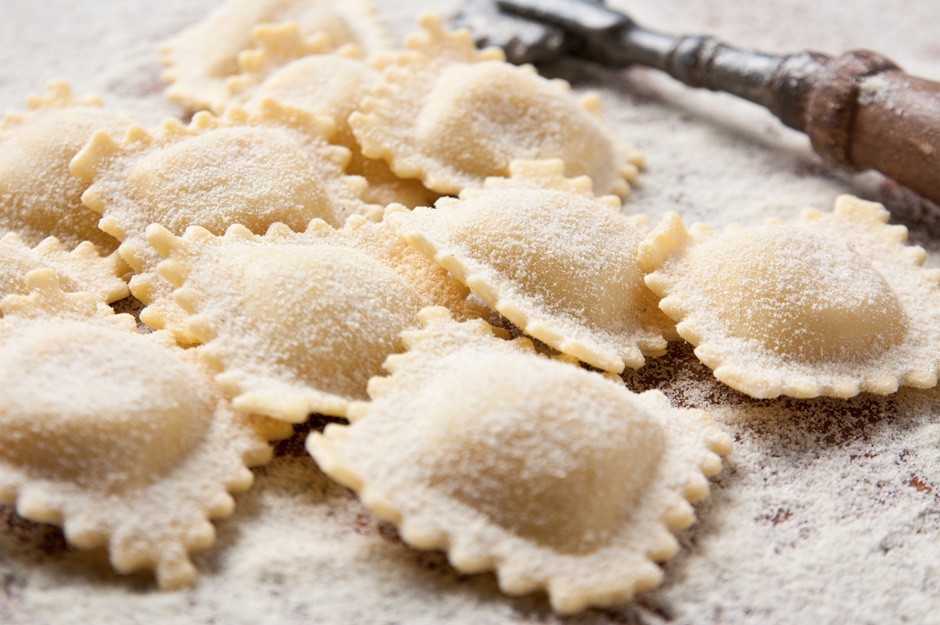 In effect, with word ravioli we refer to all kinds of filled pasta where a thin layer of dough wraps around a filling. Ravioli can be boiled and seasoned with sauce or served in broth (especially in winter). The pasta layer is generally egg based and common fillings may include meat, cheese, vegetables and vary greatly between the countless regional recipes.

We said that basically the most famous filled pasta out of Italy are Ravioli, but Ravioli change name and often also shape, size and fillings based on the region of Italy. Here is a list of the most popular kinds:

Agnolotti are from Piedmont and are made by layering two sheets of dough and cutting out a circle or a square or by folding a circle or square of dough in half. Agnolotti are usually relatively large and is filled with braised beef, ham, spinach, Parmigiano and egg, and served with the gravy from the beef or with butter and Parmigiano.

Cappelletti are typically from Emilia Romagna region. They are large as well as tortellini and they are obtained by placing the filling in the middle of squares of pasta dough, then by folding the dough diagonally to form a triangle, and by wrapping it around a finger until the opposing corners overlap and can be pressed together. The name in Italian means small hats and come from the funny shapes of small paper hats. The filling may include meat and Parmigiano and they are served in chicken broth.

Pansoti are a variety of ravioli from Liguria. They are quite large and made by cutting squares or circles of dough and folding them in half. The name come from the dialect and means big bellies. They are filled with ricotta, Parmigiano and chard and served with the typical “salsa di noci” a sauce made with walnut and bred.

Tortelli are common in all northern Italy, they are square and flat but they may be also round. A famous kind of tortelli are filled with pumpkin and Parmigiano and served with butter and sage. In Tuscany, tortelli have a meat base filling, but many other filling exist.

Source: Ravioli: the Food of Kings and Peasants

CONSUMER TRENDS: WHAT TO EXPECT AFTER THE PANDEMIC

LOGISTICS 4.0 IS MAKING SPACE TO SUPPLY CHAIN 5.0: ARE WE READY?

6 ingredients for a perfect Italian meal in winter

The power of honey: health benefit all year round