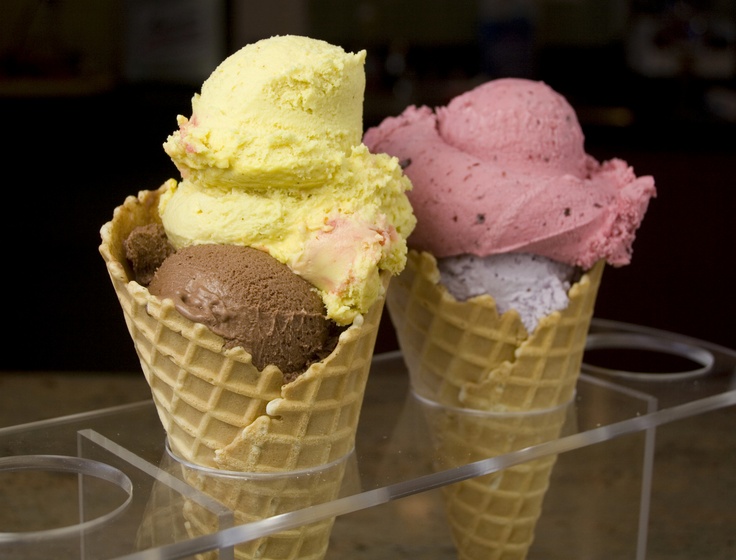 Apart from the fact that gelato comes from Italy, people usually consider gelato and ice cream synonymous terms, but that is absolutely not the case. There are four main differences – let’s have a look at them.

1 – Italian gelato has much less fat. American ice creams have to contain at least 10% fat by law, while gelato usually contains an average of 3.8%. That’s because, unlike ice cream, gelato is made with fresh milk and not powdered milk or cream.

2 – Italian gelato is blended slowly, so it contains less air than industrially produced ice cream (10% air in gelato, 50% in ice cream). A balanced quantity of air is an essential step when making good gelato: it affects the consistency, smooth texture and appearance.

3 – Italian gelato is kept at a temperature of around -12°C, while industrially produced ice cream is usually kept at an average of -20°C. This makes an unmistakable difference to the product’s taste.

4 – Italian handmade ice cream is usually made in small batches that are consumed shortly afterwards. That’s why it doesn’t need the preservatives or additives that industrially produced ice cream needs to be stored for long periods of time.

A year-round market
If we analyse global consumer trends in frozen desserts (ice cream, Italian gelato and sorbet), one fact stands out: they are all products that are not influenced by the season or climate. If we look at per capita consumption per country, Business Insider’s league table surprisingly awards New Zealand the top spot, with an average of 28.4 litres per person per year, followed by the USA with 20.8, Australia with 18, Finland with 14.2, Sweden with 12, Canada with 10.6, Denmark with 9.9, Ireland with 9.4, Italy with 8 and the UK with 7. What’s even more surprising is the figure that reveals that, of all the states in the USA, Alaska – where the average temperature never rises above 19°C – consumes the most ice cream. In contrast, Texas, where the climate is decidedly warmer, only comes tenth.

The Italian gelato boom in the USA
Italian handmade gelato is increasingly popular in the USA. Thanks to the range of flavours, its nutritional balance and its ‘exotic charm’, it’s the perfect combination and a luxury that many Americans are increasingly indulging in, even if just to take in the typical atmosphere of an Italian ice cream parlour. If we look at the figures, consumption of Italian gelato in the USA has been constantly increasing since 2009, with annual sales estimated to be worth approximately $210 million. However, we should stress that although gelato accounts for a smaller share of the frozen dessert market, it is also the sector with the fastest growth (up 32% in 2016).

As governments all over the world began the distribution of Covid-19 vaccine, cold chain management has emerged as a…

It is the second largest island in the Mediterranean Sea, after Sicily and before Cyprus. Geographically, it is…