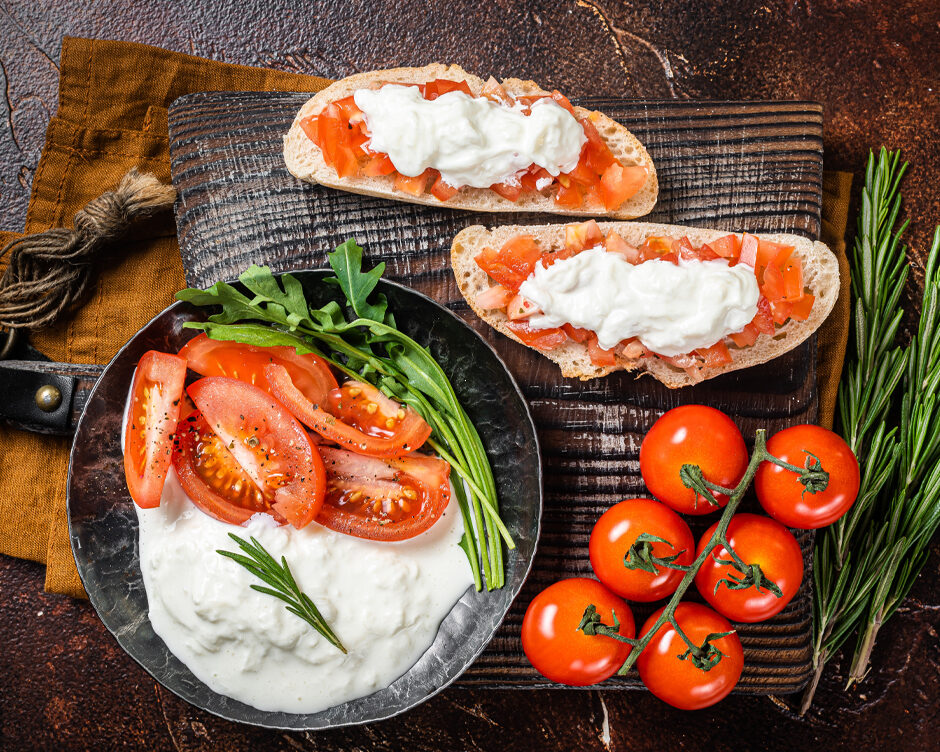 Stracciatella is becoming more and more popular everywhere as chefs all over the world, who appreciate its taste and versatility, are featuring it on their menus. Despite the confusion that may be generated by its name – which defines also an egg-enriched soup and a chocolate-flecked ice-cream – Stracciatella is the trendiest of all the Italian fresh cheeses: a luscious, creamy cow’s milk cheese made of shreds of mozzarella (to shred is stracciare, in Italian) mixed with cream.

Possibly the best by-product made with mozzarella leftovers, Stracciatella originated in Puglia at the beginning of the last century; just like Burrata, its descendant, which is Stracciatella wrapped in a layer of fresh mozzarella sealed with a knot. Nowadays Stracciatella is made with cow’s milk, but in the province of Foggia in Puglia an excellent version of it is produced using buffalo’s milk.

Though excellent on its own, Stracciatella can be treated as an extremely versatile ingredient in both simple and complex preparations as its texture and mild taste lend themselves to a rather creative use in the kitchen. As the array of diverse recipes available online confirms, it can easily be paired with almost anything. You can use it to prepare a pasta sauce or to make your risotto creamier, put it on a pizza or lay it on a bruschetta. Recent culinary experiments even mention making gelato with it, served with tomato jam. Stracciatella works really well also with vegetables like pees, leeks, fennels, beetroots and – of course – fresh tomatoes. Creative desserts feature it alongside grilled peaches or grapes.

Although many people who travelled to Italy and discovered Stracciatella here keep asking for it in their local restaurants, Stracciatella still seems to be rather hard to find abroad. The main issue with this cheese is that it is so fresh and delicate that, just like Burrata, it has a rather short shelf life: this is why in Alifood we offer frozen IQF solutions that allow us to ship everywhere in the world while ensuring that all the organoleptic properties are preserved and the product can be enjoyed as freshly made.

Maybe bread is not the first thing that comes to mind when you think about online retail. However, bakery…

Italian special bakery: an introduction to Italian pastries and cakes

After pizza, pasta, cheeses and wines, Italy is famous also for its pastries tradition. Italians have an ancient and…

Pumpkins are a kind of cucurbitaceous, the genus that includes squashes and edible gourds. It has nourished people…