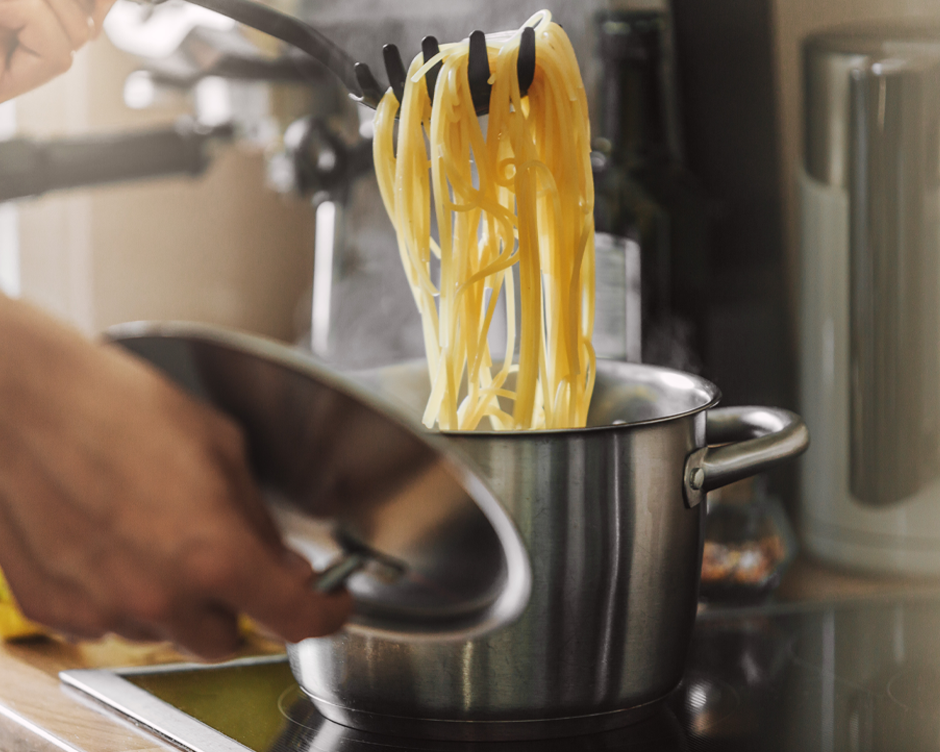 If you add Italy and food the result is always pasta. Easy-to-prepare, delicious and so versatile that it can be combined with a plethora of other ingredients to create some of the world’s favorite dishes. Funnily enough though, the most famous pasta recipe in the world is not one of those that a visitor would find featured on a menu in any restaurant in Italy: probably because of its history, linked to somebody feeling unwell, or maybe for the abundance of butter which is not very popular in the Mediterranean diet.

Created in 1914 by Alfredo Di Lelio, the owner of Alfredo’s Restaurant in via della Scrofa (Rome), Fettuccine Alfredo was a recipe born out of necessity. According to the official version of the story, at the time Alfredo was trying to help his wife gain back her appetite that she had lost after giving birth. Dish after dish, he eventually prepared a plate of fresh fettuccine and creamed it in a pan with butter and Parmigiano. Besides bringing his wife’s appetite back, rumor has it that a couple of American tourists – dining in Alfredo’s restaurant a few years later – tried it, fell in love with it and decided to export it to the USA, where now Fettuccine Alfredo is still synonym with Italian pasta.

As it often happens to Italian dishes that have become extremely popular also abroad, their preparation is somehow divergent from the original recipe: cream is an addition that dates back to when it was impossible for any cook abroad to obtain the same richness without having the ingredients that Alfredo used (namely, Parmigiano-Reggiano, which was not imported into the States until well after World War II). Parsley appeared at some point as a decoration, before being eventually included in the recipe as an unofficial ingredient that meets the American taste.

Something similar happened to another popular pasta dish, Carbonara. According to the Italian Academy of Cuisine, this is the most falsified Italian recipe in the world: bacon instead of guanciale, eggs rather than egg yolks only and then a series of random additions such as garlic, cream and wine, let alone soft cheese in the place of a good, finely grated Pecorino. Considered as a typical Roman recipe, its name – that apparently comes from a dish made in the Apennine mountains by charcoal burners (carbonari) – was mentioned for the first time in the 1951 movie “Housemaid”. During a job interview with the waitress Maria, the employer asks <Excuse me a moment, but do you know how to make spaghetti carbonara?>.

Interestingly, the film’s fiction confirms that the recipe was not so widespread at the time, since the waitress states that does not know it while she claims to be able to prepare Spaghetti Amatriciana…yet another famous pasta recipe that shares the same destiny as Carbonara. If one wishes to stick to the original preparation, only a few ingredients are needed: spaghetti (or bucatini, similar to spaghetti but thicker and with a hole running through the center), guanciale, San Marzano tomatoes and Pecorino Romano. No garlic, no onion and no bacon. If simplicity is the ultimate sophistication, as Leonardo da Vinci used to say, “less is more” should be the mantra for anyone wishing to prepare a real, Italian pasta dish.

Increasing consumer demand for transparency has led to a growing number of food traceability certification schemes and analytical tools.…

A Visual Guide for Italian Mushrooms, an infographic

Mushrooms are kind of baffling: they’re shaped strangely and they grow in dark, humid areas in the woods.…