THE YEAR 2017 FOR ITALIAN WINE

Italian wine in numbers
In 2017, Italy exported a total of 1,644 million Euros worth of wine, an increase of 1.44%. It has to be said that the French cashed in a bit more (1,649 million), but we beat them by quantity: Italy exports 3.3 million hectolitres while the French merely reach a total of 1.6 million, putting them behind Australia (1.9 million). In the first two months of 2018, Italy roared ahead in value: 243 million Euro ended up in the country’s coffers, while the French had to make do with 227 million. Why? Mainly thanks to Prosecco.

The rising success of the bubbles
The growing success of Italian wines is largely due to its bubbles, at least if we consider Nomisma’s “Wine Monitor” research which, in 2017, marked a very impressive trend in sparkling wines. Just think that Italy contributes 23% of the world’s export in sparkling wines, a percentage that just ten years ago was less than half (10%). The explosion of bubbles is thanks to the Prosecco phenomenon which, over the last five years, has grown by 117.5%. In fact, Prosecco has paved the way for all Italian bubbles, showing the more mature markets such as the USA and the UK that there is more to this product that champagne, and that you can enjoy a good sparkly without spending an arm and a leg.
But as well as sparkling wines, the entire white wine industry has grown and conquered: in fact, according to the Wine Monitor, Italy is the world leader in the export of white wines, beating the French, Spanish and the Australians. Italian biodiversity is paying off: the most important global markets have tired of sipping Chardonnay and Sauvignon, variety is the spice of life and interest has been sparked for the lands behind a successful wine. Something that seemed almost impossible a few years ago when the Australians, New Zealanders and South Africans were seen as the future conquerors of the white wine market.

The main players of the market
At the turning point of 2017, the list of Italian wine-producers gained two positions with a turnover of more than 100 million Euro. Two leading brands entered the prestigious Over 100 Club with an above average growth: the Mondodelvino Group, a young business based in Forlì which ranked 17th with a turnover of 106.84 million and Ruffino, the Italian branch of the American company Constellation Brands which entered number 18 with a turnover of 106.83 million Euro. Bringing the market’s “big brands” to a total of 19, two more than the year before and five more compared to 2015. 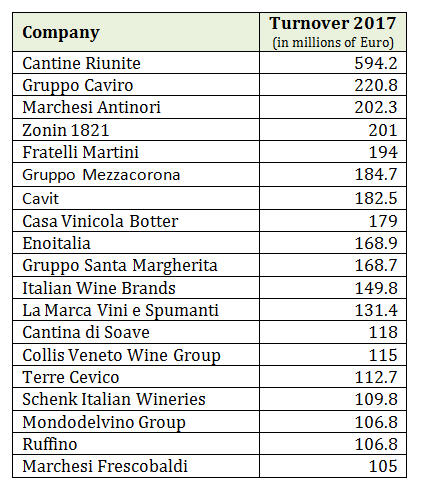 Together, these 19 big players represent a turnover of more than 3.3 billion Euro, with exports exceeding 2.3 billion and a production of more than 1.2 billion bottles.

Food and Beverages Trends for 2016: natural food and return to basic

Taste the future: Alifood at the Anuga 2015