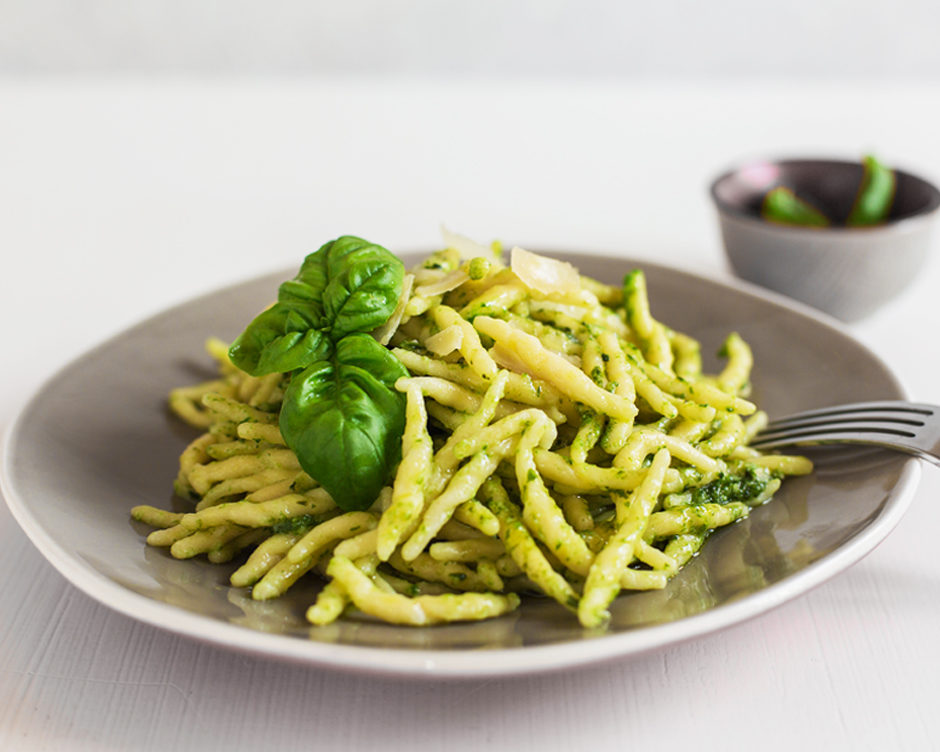 There is something about Italy that makes this country so special: it is not just the abundancy of art or the variety of landscapes, it is its food. The beauty of it is that each region has its own recipes and they are all so tasty that a trip to Italy could easily be organized as a culinary tour of the so-called Bel Paese (beautiful country) via its most traditional dishes.

Starting from the North-West of the country, one of the most popular is pasta with Pesto Genovese. Typical of the city of Genoa (Genova, in Italian), from which it takes its name, pesto sauce was first mentioned in its contemporary version by the gastronome Giovanni Battista Ratto in his book “La Cuciniera Genoese” dated 1863. Its origin, though, is still debated: some maintain that Pesto Genovese has a strong link with the agliata, a garlic-based sauce that used to be prepared in the Middle Ages to preserve food once cooked, while others are more inclined to believe in the legend of a friar who created the sauce by chance, just by crushing some basil together with a few, simple ingredients received as an offer by the local community.

Notwithstanding the controversy about its origin, the recipe for Pesto Genovese is now protected by the Consorzio Pesto Genovese that dictates its seven ingredients: Genovese DOP* basil, extra virgin olive oil (possibly the one produced in the Ligurian Riviera), Parmigiano Reggiano, Pecorino cheese, pine nuts, garlic and salt. As the word pesto comes from pestare, which means to pound, the authentic Pesto Genovese is prepared by using a marble mortar and a wooden pestle to crush and mix all these ingredients in order to obtain a creamy sauce that is then poured uncooked over pasta.

Since Pesto Genovese should ideally be made shortly before it is eaten, these days many people tend to reduce the preparation time by using a food processor when making pesto at home: unfortunately, the steel blades tend to oxidize the basil thus ending up with a very dark green and slightly bitter pesto. Just like for anything that concerns real Italian recipes, even with pesto it is a matter of appreciating the joys of slow food therefore there is no proper substitute for pounding by hand; likewise, since each pasta has its sauce, Pesto Genovese should be served with trofie or trenette. It is also good for adding extra taste to vegetable soups and as a heathy spread in sandwiches.

The tomato is one of the symbols of the Mediterranean diet, even though it comes from a very…

The uncanny tastiness of Burrata

Let’s get one thing clear: Burrata is not mozzarella, neither buffalo mozzarella! Burrata is a typical Italian fresh cheese…

PLEASE MEET OUR TEAM: OUR ACCOUNTANT

According to Warren Buffet, accounting is the language of business. It is not just about terminology, it is more…