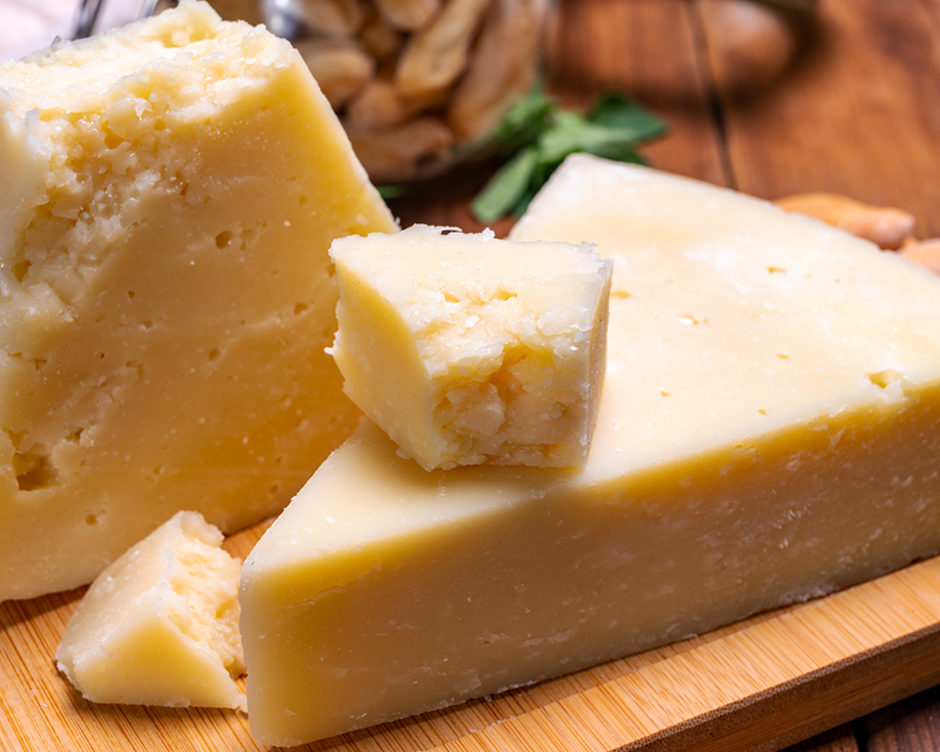 Among all the Italian cheeses, Parmigiano Reggiano is probably the most famous all over the world. There is another one though which may be less popular abroad but that definitely plays an important role in the cooking routine of many Italians: Pecorino.

Generally speaking, Pecorino is the name given to all Italian cheeses made from ewe’s milk; its name comes from pecora which in Italian means ewe. Specifically, it refers to three main varieties from central Italy and the island of Sardinia which enjoy the DOP* seal: Pecorino Sardo from Sardinia, Pecorino Toscano from Tuscany and Pecorino Romano from Lazio.

Pecorino Sardo DOP is made exclusively in Sardinia from pasteurized Sardinian ewe’s milk. It has a smooth, thick crust that turns brown as it ages; the paste, rather compact, is pearly white but tends to become straw yellow with the ageing process. The cheese wheels – aged for at least sixty days – weigh between seven and nine pounds. Due to the use of lamb rennet in its preparation, Pecorino Sardo has a strong flavour which goes well with fresh vegetables and fruit – especially peaches and pears – and honey (as in the famous Seadas, local deep-fried pastries filled with Pecorino and lemon zest and drizzled with honey). It is also a good appetizer, accompanied by a glass of chilled Sardinian Vermentino wine.

Pecorino Toscano DOP is also made exclusively from ewe’s milk but, unlike Pecorino Sardo, it can be produced outside Tuscany, in specific cheese factories that respect the procedural guidelines dictated by the DOP certification body. The cheese wheels – weighing on average between two and eight pounds – have a yellow crust and a compact, firm paste. Pecorino Toscano is sweet and delicate to the palate when fresh, more intense when it ages. Both these versions are perfect with dried fruit and nuts which – together with a good selection of local cold cuts and a glass of Chianti wine – make the typical Tuscan aperitivo.

Of all the DOP varieties of this cheese though, Pecorino Romano is perhaps the most popular and distinctly Italian. It is also the “oldest”, as its consumption dates back to the ancient Romans who considered it the perfect food for soldiers. Pecorino Romano is now produced in the regions of Lazio and Sardinia and in the Tuscan province of Grosseto by mixing lamb and calf rennet with fresh, whole ewe’s milk that undergoes a strictly-regulated cooking process. The crust is thin and ivory; the paste ranges from white to straw yellow and it is rather compact. Saltier and higher in acidity than the other two, Pecorino Romano is the one that gets aged for a longer time (at least five months) before being sold, thus resulting in an aromatic, slightly piquant table cheese. Often paired with mature red wines, Pecorino Romano gives its best when used grated to complete traditional pasta dishes like Cacio e Pepe, Carbonara and Amatriciana.